Like any device subject to judgment in design, or to human error during installation, O-ring seals are liable to failure. The following brief summary of O-ring failure patterns is intended to give the designer/engineer a brief overview of the more common types of failure and a listing of recommended corrective actions. While there are a number of different types and causes to seal failure, we intend here to cover only the types encountered most frequently.

Why an O-Ring Fails
The failure of an O-ring in service can usually be attributed to a combination of causes. Most often, with the absence of one of the conditions existing at the time of failure, the O-ring would have continued performing. It is important to maximize sealing life and reliability by reducing the probability of seal failure at the onset by the use of good design practices, proper compound selection, pre-production testing, and continued education and training of assembly personnel.

Extrusion and nibbling of the O-ring is a primary cause of seal failure in dynamic applications such as Hydraulic Rod and Piston seals. This form of failure may also be found from time to time in static applications subject to high pressure pulsing which causes the clearance gap of the mating flanges to open and close, trapping the O-ring between the mating surfaces.

Failure Analysis
In general, EXTRUSION and NIBBLING are caused by one or more of the following conditions:

Prevention/Correction
Suggested solutions to the causes of Extrusion and Nibbling listed above are:

Identification Of Extrusion Failure
A typical example of O-ring extrusion is when edges of the ring on the low pressure or downstream side of the gland exhibit a “chewed” or “chipped” appearance.
In an O-ring that has failed due to nibbling, it may have the appearance that many small pieces have been removed from the low pressure side. In some forms of extrusion, more than 50% of the O-ring may be destroyed before catastrophic leakage is observed.

Probably the most common cause of O-ring failure is compression set. An effective O-ring seal requires a continuous “seal line” between the sealed surfaces. The establishment of this “seal line” is a function of gland design and seal cross-section which determines the correct amount of squeeze (compression) on the O-ring to maintain seal integrity without excessive deformation of the seal element. There are a number of factors that can contribute to compression set failure of an O-ring seal. They are listed below.

Failure Analysis
In general, COMPRESSION SET is caused by one or more of the following conditions:

Prevention/Correction
Suggested solutions to the causes of compression set are:

Identification of Compression Set Failure
A typical example of classic O-ring compression set in simplistic terms: the O-ring ceases to be “O” shaped and is permanently deformed into a flat sided oval, the flat sides of which were the original seal interface and under compression before failure.

Spiral failure of an O-ring is often found on long stroke hydraulic piston seals and to a lesser degree on rod seals. This type of O-ring failure is caused when the seal becomes “hung-up’’ at one point on its diameter (against the cylinder wall) and slides and rolls at the same time. The resultant twisting of the O-ring as the sealed device is cycled finally causes the seal to develop a series of deep spiral cuts (usually at a 45° angle) on the surface of the seal.

Failure Analysis
As stated above, spiral failure is generally caused by an O-ring both sliding and rolling at the same time. Conditions which may cause this to occur are:

Prevention/Correction
Suggested solutions to the causes of spiral failure are as follows:

Identification Of Spiral Failure
You will see the typical cuts that gave this type of O-ring failure its name.

With the advent of the space age we are seeing this type of O-ring failure with increasing frequency. It might be termed O-ring embolism, in that after a period of service under high pressure gas, when the pressure is reduced too rapidly, the gas trapped within the internal structure of the O-ring expands rapidly, causing small ruptures or pitting on the O-ring surface.

Failure Analysis
Explosive decompression, or gas expansion rupture is caused by high pressure gas trapped within the internal structure of the elastomeric seal element. Rapid decrease in system pressure causes the trapped gas to expand to match the external pressure and this expansion causes blisters and ruptures on the seal surface. If the volume of trapped gas is small, the blisters may recede as the pressure is equalized with little effect on seal integrity. Excessive trapped gas may cause total destruction of the seal.

Identification Of Explosive Decompression Failure
The seal subjected to explosive decompression will often exhibit small pits or blisters on its surface. In severe cases, examination of the internal structure of the O-ring will reveal other splits and fissures.

Another rather common type of O-ring failure is abrasion. This usually is found only in dynamic seals subject either to reciprocating, oscillating, or rotary motion. Possible causes of O-ring abrasion are listed below.

Failure Analysis
In general, abrasion of O-ring seals is caused by one or more of the following:

Prevention/Correction
Suggested solutions to problems caused by abrasion are:

Identification Of Abrasion Failure
The O-ring that has failed due to wear through abrasion usually exhibits a flat area on the side of the seal which was in contact with the dynamic surface. Frequently there will be wear lines on this flat surface parallel to the direction of motion. Abrasion failure may be differentiated from compression set failure in that with abrasion, only one side of the O-ring will be flat or worn while with compression set failure, both sides of the O-ring are equally deformed.

Many O-ring failures can be directly attributed to improper installation. In spite of its simple appearance, the O-ring is a precision device requiring care during installation. Some of the more frequent causes of O-ring failure due to careless handling are listed below.

Failure Analysis
Damage to an O-ring during installation can occur when:

Prevention/Correction
Probably the best way to prevent damage to O-rings during installation is the use of good common sense. There are some specific solutions which are listed below:

Identification Of Installation Failure
It is difficult to properly illustrate the many possible results of installation failure. One of the more common failure modes is the “Skiving’’ of the O-ring surface due to cutting by metal components. Those cuts are usually very clean as if made with a very sharp knife. Another indication of bad installation will be small cuts or notches on the O-ring. In almost all cases, the damage will appear on the surface of the O-ring away from the bottom of the O-ring groove.

Other Causes of O-Ring Failure

Although not illustrated here, there are several other possible causes of O-ring failure. They are: 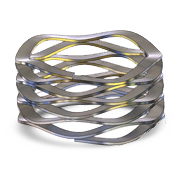